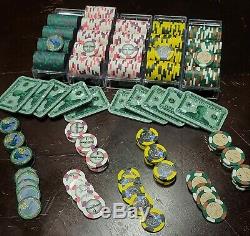 About The President Casino New Yorker Casino chip series. In 1997, the New York City Gambling Control Commission was established to regulate potential "cruise-to-nowhere" operations originating from New York City. In their 1997 Annual Report, stated that the company believed they were uniquely qualified to pursue this opportunity in the New York City market due to their extensive gaming and marine experience through their existing licensed riverboat and dockside casino operations. In January 1998, President submitted the appropriate applications and background checks to the NYC Gambling Control Commission to operate a "cruise-to-nowhere" vessel from New York City. This included hiring 150 staff, outfitting the four deck vessel with 40 new gaming tables and space for as many as 550 slot machines, obtaining Coast Guard approval to begin daily six-hour excursions, taking practice cruises and having 163,000 Paulson chips made. President received notification in April 1998 that the NYC Gambling Control Commission was not prepared to issue a provisional license. The Daily News reported that month that NYC Mayor Rudolph Giuliani decided to deter shipboard gambling, especially from city piers.

In a Fiscal Year 1999 Letter to Stockholders and Employees, President noted the company was not denied a license, and there were no "cruise to nowhere" operations at the time in New York City. The vessel docked in Brooklyn was renamed "New Yorker" and leased to various third parties from July 1998 through 2000. It was subsequently auctioned off to SunCruz Casinos in 2003 after President declared Bankruptcy. Additionally, these chips were created with cutting edge security features as demonstrated in the photos provided. These are the highest quality chips available on the market to consumers.